Strong work to everyone who showed up to practice on Wednesday.  The filming went great and it should be exciting to see in a couple of weeks when the segment airs.
I will post the air time as soon as they let me know.  Again they have asked for us to keep the fact that they are doing an UWH segment sub rosa until it airs. 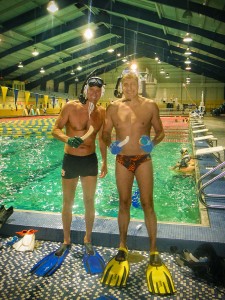 Thanks to Rowdy Gaines who played underwater hockey for the first time. Rowdy is NBC’s Olympic Swimming Commentator and a former triple gold medalist. He says he will be back!

It was a great scrimmage Wednesday so lets make another one happen on Friday!